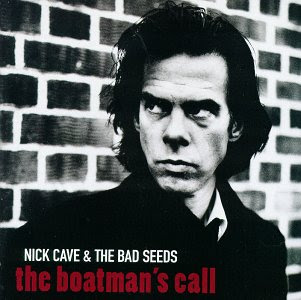 For me, albums I truly admire can be divided into two piles: those I wish I’d written and those I wish someone had written about me. The Boatman’s Call is very much the latter.

When an album opens with a song as beautiful as Into my Arms where the sceptical Cave asks God and angels to watch over his lover, you know it is going to be a bit special. By comparison the bilge spouted by young pretenders like James Blunt looks trite and cheap.

Written after his relationship with PJ Harvey and one divorce, Nick Cave penned the most poignant post-relationship album ever. The album is peppered with references to Polly Jean and I can only imagine how she must have felt when she heard songs like Black Hair and West Country Girl, but then she got her own back with Is This Desire.

As Cave himself put it in a lecture entitled ‘The Secret Life of the Love Song’, “the peculiar magic of the Love Song, if it has the heart to do it, is that it endures where the object of love does not”. And that is exactly what People Ain’t No Good is about. In it, Cave laments his estrangement from Viviane Carnerio, his lover and mother of his son Luke. He charts the marriage through ultimately to the ‘death’ of the relationship where he asks “To our love send a dozen white lilies, to our love send a coffin of wood”.
The other favourite (a favourite among favourites, if you like) for me, Are you the One That I’ve Been Waiting For. A moody, pulsing track full of longing and frustration where Cave, in wait of his soul mate, questions the nature of love: “We will know, won’t we? The stars will explode in the sky. But they don’t, do they? Stars have their moment, and then they die”. Anyone who’s felt jaded and cheated by fairy tale romances will know exactly what he’s talking about.
For some, The Boatman’s Call may be too morose, gloomy even. But for me it is the most perfect commemoration to lost love.
Words: Kate Hamblin