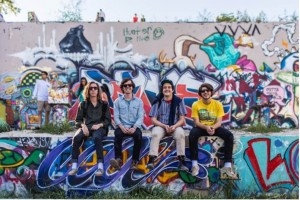 The Districts will release their new single, ‘Peaches’, on 9th Feb via Fat Possum Records alongside their brand new album ‘A Flourish And A Spoil’.

Tipped by NME as ones to watch for 2015, The Districts will mark the release of their new album with a sold out show at London’s 100 Club as part of the NME Awards Show series and will tour the UK and Europe in April 2015, including a headline show at London’s Scala on April 28th. Full listings below.

Pre-order ‘A Flourish And A Spoil’ on iTunes.

Limited Edition clear green vinyl can be pre-ordered from the Fat Possum store.

← Album | Diagrams – Chromatics
Interview | The Decemberists’ Colin Meloy on the new record – and being ‘Simpsonised’. →