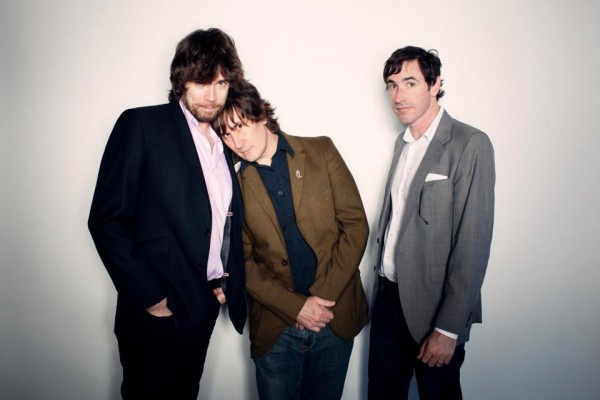 FFS is failing to contain itself because THE MOUNTAIN GOATS are giving away a free single from their new album Transcendental Youth.

John Darnielle said,”Like a lot of the new album, Cry for Judas is about saddling up your demons and learning to ride them like devil horses with big leathery wings. To the best of my knowledge, it’s also the first song ever to feature both a swinging horn section and a line about a baphomet drawn in chalk on an altar cloth, so everybody else who was trying to square that circle can take a breather now.”

There’s loads to tell you about the new record too. It’ll be released in the UK via Tomlab on 8th October. But you can pre-order it now from their US label Merge and if you’re one of the first 1,000 to do so you’ll get a limited edition 7″. Pre-order now. 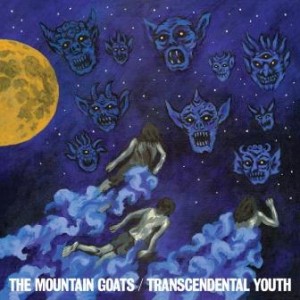 John Darnielle is a human male and American musician who was born in Indiana.

Alone or in collaboration with others, he has been known as the Mountain Goats since 1991.

He grew up in Central California, and has lived in many states, but now lives in North Carolina with his wife and child and at least one cat that I have observed.

I visited his home in the year 2011. I took off my shoes when I came in the door because that is my habit. No one made me do it.

John Darnielle’s house is not rockstar huge, nor rockstar glamorous. It does not have a home theater or rolfing center. It’s modest.

There is an office packed with shelves reflecting his preoccupations: pulp horror and philosophy and religious study. John Darnielle is fascinated with both death metal and the Holy Bible and speaks eloquently of the dark magic and elegance and grace of both.

Now I am going to tell you that, in the study by the stairs, I stepped in a little bit of cat vomit.

I can report that John Darnielle was not embarrassed. Because he knows it is in a cat’s nature to vomit, and because he saw an opportunity for kindness. He loaned me some socks, and they were argyle, warm from the dryer and very soft.

The house has a basement, which John Darnielle describes as “awesome.”

The basement is not particularly awesome. (I have seen some awesome basements.) It has some drums and guitars in it but otherwise is a fairly typical basement of a modest, middle-class home. Normal.

It is my impression that this may be why John Darnielle considers his basement to be awesome, for such normality was not necessarily going to be his fate.

Inside the basement is a box of a limited-edition, alternate vinyl version of his album The Sunset Tree, which came out in 2005. Each one is hand-painted by John: white sleeve traced with naïve snakes and swirls of bright color.

John Darnielle told me that he made these when things were going well in his career, but he was still not convinced he was going to make it…when he still thought he might have to go back to psychiatric nursing, which is what he did when he started writing and recording songs.

Those first recordings, you may have read, were made on a simple cassette recorder. And those tapes of just him plus guitar are full of hiss and urgency. They were made for one reason. Like these hand-painted LPs, even if all else failed, they were going to get out there, no matter what.

He has written almost 600 songs now, and some of them are very sad, dealing with hard drugs and tragic ends, hurting yourself and others, sicknesses of both body and brain, off-brand alcohols. They are told in beautiful, unnerving, specific detail, because John Darnielle is a very good writer, and also some of them are just true stories about his own life.

But many have noted that John Darnielle seems often very happy, and his demeanor on stage is almost exclusively unhaunted, ecstatic.

Anyone who reads his Twitter feed knows he takes great delight in his delights: vegan cooking, fat babies, hockey, the beautiful alchemy of Chemex coffee, Anonymous 4, playing music for people, loaning out socks when the time comes, basements.

These are the consolations; and if some of his songs suggest that there are real hells on earth, other songs remind that the heavens are equally close at hand.

(Sometimes they are even the same songs.)

It is my impression that this is the ecstasy John Darnielle is feeling: that thrill of having survived, escaped for even a second to enjoy those small transcendent delights, and to sing of them.

And I can report that if you are standing in the basement with John Darnielle and wondering how he survived this far, to stand happy in this heavenly basement, you may look down at the hand-painted album of songs you are holding and realize the answer is in your hand.

Like that album, TRANSCENDENTAL YOUTH is full of songs about people who madly, stupidly, blessedly won’t stop surviving, no matter who gives up on them.

I can report that it is a very good album and has many more instruments on it than those early tapes, including Peter Hughes on bass, Jon Wurster on drums, and, for the first time, a full horn section. And all of this makes a very joyous noise.

Everything I have written here is true, to the best of my knowledge.

I am not giving back the socks.