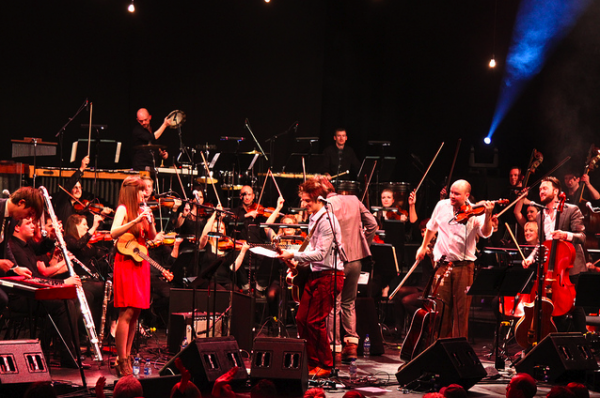 The Leisure Society and the Heritage Orchestra by Sapphire Mason-Brown

Thursday night saw The Leisure Society perform with The Heritage Orchestra at the Barbican in London. It was as triumphant a show as you might expect. Hearing the songs we know and love so well treated with the reverence they so richly deserve reduced at least two of the team that run For Folk’s Sake to emotional wrecks – alternately smiling goonily and choking back the lump that threatened to expose us as terrible wusses.

Cementing the Leisure Society’s place as the thinking celebrity’s favourite band (they’re loved by Dermot O’Leary, John Simm and Olivia Coleman among others), comedian Chris Addison wrote the programme notes for the show. They’re a great read, and he’s kindly allowed us to reprint them here.

If you are a music fan – and the fact you’re sitting in that seat right now seems to suggest that you probably are – then you’ll know vetr well the bolt-from-the-blue, didn’t-expect-that-when-I-got-up-this-morning delight and glory that is finding Your New Favourite Band. It’s a great moment, that. Hearing Your New Favourite Band for the first time makes you think, “Of course that’s how music should be being made. It’s so obvious now. How had I not realised that before?” Their particular combination of melody, voice, production – it all makes such blinding sense. It’s like being told the answer to a puzzle and immediately understanding it but knowing that you could never have arrived at the solution yourself.

Why am I telling you this? You of all people. You know exactly what it’s like. And I don’t know if you agree with this, but it seems to be that the older you get the less often you find Your New Favourite Band. Certainly that’s how it’s been for me. So thank the Great God Twitter for the moment that I dozily clicked the link that music junkie Graham Linehan posted to The Leisure Society’s Last of the Melting Snow.

The Leisure Society is My New Favourite Band. I have spent most of this year with their two albums on permenant rotation. I have bullied friends into buying Into The Murky Water. I even stood over the shoulder of one of them whilst he downloaded it from iTunes, declaring that if he didn’t like it I would refund him the money and delete it from his phone myself as he wouldn’t deserve to have it.

I find it hard to describe their music. Partly this is because they don’t sound like they’re trying to be anyone else – they just sound like they’re trying to find the best songs the instruments have in them. But then it’s also that The Leisure Society’s music labours under the burden of all those loaded descriptions ‘thoughtful’ and ‘well-crafted’. Too right, it is; it’s so thoughtful and so well-crafted it should have its own hallmark. But very often those adjectives carry associations of ‘ponderous’ and ‘self-absorbed’. Not here. This is filigree pop: impressive and dazzling but when you go closer you can see how detailed and delicate it is – you can spend hours admiring the craftmanship, spotting things you’d never noticed before.

They’ve got bounce; A Fighting Chance on The Sleeper has one of hte best intros I’ve ever heard for sticking on your iPod and striding out into the world to. It feels like you’re at the beginning of a really good film about your day. They have an extraordinary line in melancholy; The Sleeper itself is the cheeriest description of oblivion since Professor Brian Cox explained the heat death of the Universe to us. And they have a rare way with lyrics. So often song lyrics seem like those little sachets of silica gel that fall out of the cardboard box your telly came in – somehow necessary to get the thing over to you, but hardly the most important thing in the package. But look at Our Hearts Burn Like Damp Matches. The words of the chorus are not only rather beautiful but they’re weaved into the music itself, part of what makes the sound of the song.

And now here they are, My New Favourite Band, about to take the stage of the Barbican with The Heritage Orchestra. It’ll be exciting to see how The Leisure Society’s intricate, jewel-box arrangements expand to meet the sound of the orchestra.

My guess would be extremely well. And if I were lucky enough to be in your seat and not frustratingly on tour myself, fifteen minutes from now I would be sitting forwards on the edge of it, thinking: “Of course that’s how music should be made. It’s so obvious now. How had I not realised that before?”

The Leisure Society wrote and recorded a song ‘Christmas Mistakes’ for our charity compilation For Folk’s Sake It’s Christmas 2011, which you can listen to and buy at forfolkssake.bandcamp.com.