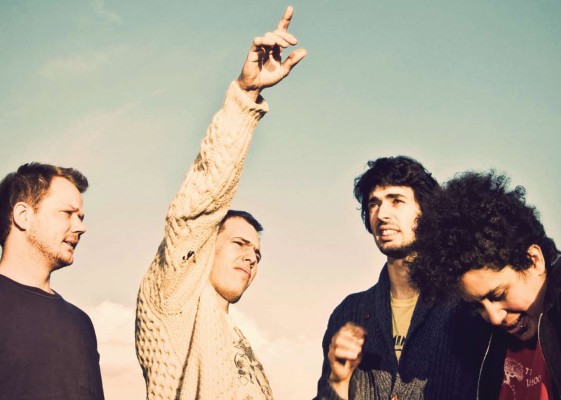 Whether or not they should be described as ‘Antifolk’ seems to be a matter of debate; however, one thing is for certain – The Bundles is a remarkable concoction of musicians who each owe something to the collaborative, supportive musical community based around the Sidewalk Café in New York’s East Village (the only place I know where free shows come with a ‘two-drink minimum’). Following the release of their debut album, The Bundles tour the UK this week, although they will be sans one member – Kimya Dawson, yet another casualty to that great ash cloud in the sky. Thankfully, the rest of the band – Jeffrey Lewis, Anders Griffen and Jack Lewis – have decided to go ahead with the tour after two surprise ‘dress rehearsals’ at Cakeshop and the Sidewalk Café went rather well, despite their diminished numbers.

“I love the community in New York. It’s so amazing to have a bunch of people who all play different types of music and come to each other’s shows, and also hang out on a regular basis,” Jack replies, when I ask The Bundles trio what this Antifolk haven over the sea is really like.

“Hanging out at Sidewalk and performing with a bunch of different creative folks there broadened my interests and understanding a lot. I wonder if I would be as open to different music had I not been there,” says Anders, while Jeff says that for him, “it’s important to have this wider community, partially for the sake of having an audience and social network that understands the context of what I’m doing. By way of contrast, the brief time I spent living in Texas I was often frustrated by the fact that other people seemed to either be ‘serious’ musicians or non-musicians. I had a hard time finding a middle ground. Stumbling into the New York Antifolk scene was a great thing and not to be taken for granted, also the fact that it was, and remains, mostly under the radar.”

And yet, for all this talk of a community, it has always been practically impossible to tie down what ‘Antifolk’ really means. It so frequently defies definition or explanation, which Jeff seems to think is pretty much the point: “It has never been a ‘movement’, just an open space for people who are starting out and maybe don’t have any other place to play or people to play to, or with. In that openness there’s inevitably no particular defining musical style.”

“No one in the New York scene would normally call themselves Antifolk,” according to Jack. “If someone asks them what type of music they played, they might say indie-rock, or folk or punk or new wave. But now, since Antifolk got some press in the UK back in 2001, there are musicians in the UK and around the world who started calling themselves Antifolk. It’s kind of fascinating.”

Yet Anders identifies a common thread: “It’s kind of a simple affirmation of personal creativity. As Emerson said, “[one] should learn to detect and watch that gleam of light which flashes across [the] mind from within.” My favourite artists, and only a few of these could be considered Antifolk, have done this in their way, and have thereby produced, to my astonishment, the most unique, personal expressions. Antifolkers tend to just go for it, no matter how weird their idea may seem, or how much others might disagree with them, or no matter how scared they are to go through with it; they just say it anyway.”

This ‘just sing it and see’ spirit was integral to the making of The Bundles’ album, which was recorded over a matter of days in Olympia, Washington, with Karl Blau acting as sound engineer and additional member.

“There wasn’t much time for things to be anarchic,” Jeff claims, “it was just like “hey, that works, let’s just hit record and get what we get”.” For him, the process “was a nice return to the good old days, after my own most recent album had taken me over a year of slow puttering to finally complete.”

The album features songs written by Kimya and Jeff many moons ago, and according to him there is a notable difference between these and the newer tracks, worked on during the recording session and “mostly written collaboratively among all the members, meaning more musical parts included and more lyrical and vocal flavours included.”

“We wrote a handful of other songs together including ‘Desert Bundles’ and ‘In the Beginning’ which I think are awesome.” Jack adds. “It was great working and collaborating with Karl. He was just supposed to be the engineer, but we loved his own songs so we made him write songs with us.”

“We figured out how to play some of the old songs while Karl got set up, and then we just knocked ‘em out one by one. When we were ready for more material we sat down and started writing together, and then we knocked those out one by one,” Anders says. “Most of The Bundles’ aesthetic, along with most of the writing, comes from Jeff and Kimya. I contributed few words. The words I offered were all I could allow myself to say, sometimes obscured versions of what I was too shy to say. But I do like the effect of a room full of people all repeatedly singing “I love you” together.”

And as for Anders’ and Jack’s contributions to the recording process, there’s quite a lot of that love all round. “Anders is probably the best musician, most drummers are.” says Jack, with Anders replying, “it’s honestly not simply to return the compliment, I’ve said it before, but Jack’s bass playing and overall musicianship was above and beyond what it was the last time we played together.”

Comprised of so many well-known musicians with their own reputations and individual projects, there is a risk that The Bundles may not be seen as a great band in its own right, but merely as a novelty collaboration to be judged against each member’s solo work. Not that this seems to bother Jeff: “it would be odd to think of people hearing The Bundles album without already knowing our other individual work. I wonder what impression it would give.” Yet Jack thinks that the album, “works on its own if no one knows Jeff or Kimya’s music. I hope more people discover it.  I think I prefer listening to it then some of our other albums.”

It is clear that The Bundles works because it takes the strengths of each member and throws them all together to see what comes out. This is only possible in a community where respect for each other’s talents precedes any notion of stardom or commercial success. It’s a very Antifolk mentality, one that has served each member well throughout their career, and one that it seems will continue to be central to the band’s continuing success. That is, if freak geological events don’t keep getting in their way.