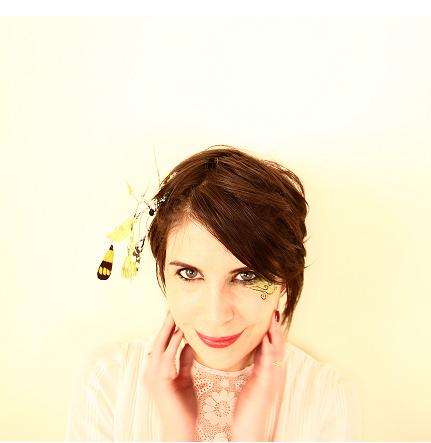 I’m Helene Greenwood and am a singer-songwriter from London. My songs defy easy categorisation with influences from folk, pop, jazz and contemporary sounds. I have recently recorded an album Collectable You with the producer Calum MacColl that it will be released in October.

My new single, ‘In the Sunshine’, is out in September, and it’s taken from my debut album. I released an EP this summer – The Break EP. It has two taster tracks – ‘Break In Break Out’ and ‘After the Fire’ – both from my album. The other three tracks were recorded in one day with Calum MacColl and James Hallawell. I wanted to create a more pared-down feel as limitations can be good for my songwriting process. Calum and James are endlessly creative so we had loads to play with.  There were also time limitations so I had to compose ‘In the Sunshine’ in a day!

My best ever gig was at The Union Chapel. It felt like being in a time warp. It was very exciting to be able to perform with Fraser MacColl and James Hallawell, Arnulf Lindner and Martyn Brabbins, all of whom had also performed on the record. I loved hearing their musical personalities on stage and to feel our sound drifting over the rooftops!

I can feel limited with how much time there is to do everything, especially as a mother; I never feel I have done enough. Music is very precious to me, a beautiful adventure, so I wouldn’t complain about being a musician at all. It is something I need to do.

I try to remember as much as possible that it is such a  privilege to be healthy. Being able to sing is a celebration of that. I love having the opportunity to be around people who think creatively, as well as finding inspiration from poets like Jo Sharpcott and film-makers like Sophia Coppola. I also follow conceptual artists like Pipilotti Rist as they are so playful with their view of life. And I constantly listen to singers, like Bjork, Fiona Apple and Lisa Hannigan who inspire me to want to sing.

Given a woman’s role in society it would be amazing to invest in a support structure to enable more women to be creative and to take artistic risks. Having that much money would be very surreal, and undoubtedly corrupting but if I did have it for some reason, I’d love to channel it into something I believed in, like this.

I think it’s ‘Great Fountain’. I remember composing it and it felt difficult, like trying to fit geometric patterns together. It has an Eastern feel to it and I love the cute, weird electro sounds that Calum sprinkled over the top of the vocal line.

Well right now focus is on the single and album, but I would love to tour more, especially outside of London. I am looking forward to performing at the record store Rise in Bristol and would love to perform for festivals too. Now the album is finished I’d also like to start working on another EP, as I have so many songs that I have started but not developed.

I’ve recently discovered Jesca Hoop. She was amazing when I saw her at Hoxton Hall in June. Becca Stevens is an American singer who creates intricate songs with the purest voice. I also like Samantha Whates. Her songs are so delicate and her voice is beautiful and can be as gentle as a whisper!