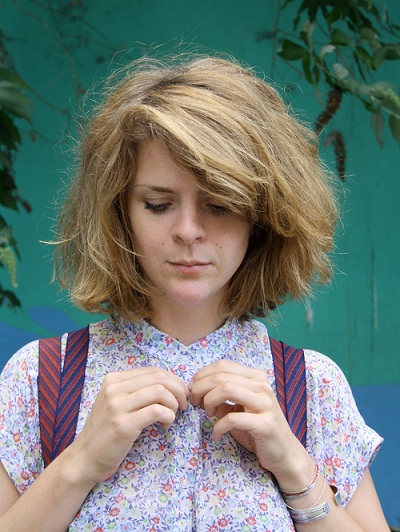 Until now, Serafina Steer has not had the acclaim she deserves.  2007’s Cheap Demo Bad Science and the more electronic Change Is Good, Change Is Good  in 2010 were albums of left-field folksy joy and intrigue, their wilfully scattered themes and influences pinned together by Steer’s exquisite harp playing. Although well-received they floated somewhat beneath the radar, but with third album, The Moths Are Real, this is all going to change. Of course, it helps if Jarvis Cocker fell in love with your second album and then offered to producer your third, but Moths feels like it’s all Steer’s voice – rather than bow to the mainstream in search of popularity she has tripped out delightfully, producing a record that is ethereal yet grounded, caustic but tender, and musically very, very imaginative.

This refusal to dilute what was so good about her earlier work has paid off. Released in mid-January to rave reviews, sold out gigs and ‘album of the month’ accolades, it has finally propelled Steer, blinking in surprise, into the spotlight.  We thought it was time to give this unique artist the attention she deserves, and managed to catch her on her way to Manchester to do a Marc Riley session. Up against the vagaries and whims of phone signal and large tunnels it wasn’t always easy to communicate, but Steer nevertheless managed to be as charming, sweet, and scattily intelligent as her music.

Congratulations on The Moths are Real being made album of the month by Rough Trade! What did that feel like?

Amazing! Completely unexpected, awesome, yeah! I had no idea they’d be interested in it.

Have you been surprised by the reception to this album?

Yeah – really a lot. I knew it was exciting that Jarvis was producing it and it was clear that that would make a difference. We pretty much finished it in the summer and got a positive response then so I was aware – but all this stuff about it being in the broadsheets…we were very surprised.

So what was it like being produced by Mr Cocker?

It was really fun!

Were you a Pulp fan back in the day?

Yes, I was, and I think he’s an excellent musician so of course I was a fan of him.

Can you talk about some of the inspirations for the album?

Well I’d been reading a lot of Borges, and his collection of short stories called ‘Labyrinths’. That’s not the only inspiration but since you asked that’s what comes into my head. I thought that would be an amazing model for an album – the structures, ideas of time, memory and consciousness….so that was a starting point. And then maybe Alice Coltrane and even Twin Peaks in a way – I’m really hesitant to use this word ‘psychedelic’ because I don’t know what it means! But I guess as a singer-songwriter it’s not so bad to be thinking about cosmic things or other worlds or transcendental psychedelic mythical music…it’s a revolution in psychedelic harp music – total harp!

Where does the title come from?

I put that up as a sign on my cupboard in my house! We knew we had this infestation of moths so I put this on the cupboard just to believe that they were real and actually laying eggs and things and making holes in all our clothes.

We had them in my house – they eat everything!

They really do! By the time you can see them they’ve probably already eaten everything. Anyway, so that got me thinking. Also in Borges, in his non-fiction which I like, he was talking about integrated metaphor and there was a nice example which I can’t remember now, but there was this example of this poet and a fallen star which turns out to be road works in the street – but it’s really interesting and lovely. So The Moths Are Real is an actual song but it has that quality of an image within it, it tells a story but then it ends up being slightly….clichéd.

Night Before Mutiny from Serafina Steer on Vimeo.

You had your harp stolen in the middle of recording your second album – did you ever get it back?

No, I didn’t. When you say I had it stolen it sounds so much like an insurance scam! Now I’ve got a lovely one – I did it get off the insurance, which was nice of them, so that’s all ok now.

Does that account for some of the differences between Change Is Good and Moths? This one doesn’t seem to have so many synths on it.

I think I just wanted to do more with the harp itself and the fact that people associate it with more ethereal or cosmic things…so instead of trying to ignore that that’s what everyone things of the harp I wanted to use that more.

You went down a very classical route with your harp initially [Steer graduated with a 1st class honours from the Trinity College of Music] . At what point did you realise you could make popular music with it?

I didn’t realise that I wanted to until I started writing songs when I was about twenty one or two. I had a boyfriend at the time who really encouraged me and I realised I really wanted to do that. It kind of grew organically as my main motivation, rather than being a classical harpist.

What are your favourite tracks on the album?

I like ‘Disco Compilation’ a lot, I really like how the sample works with it and….’The Removal Man’, I think cos I’m not playing harp on it.

What does that enable you to do?

You were born and raised in Peckham. How have your south London roots affected your work, if at all?

I think they have, yeah…I’ve never felt very au fait with that kind of rural, pastoral folk aesthetic. But I don’t know whether that’s growing up in London or… I’m not saying they’re [pastoral folk artists] generic in a bad way – really just that they maybe evoke music that I’m also not – I’ve just never longed to live in the country or look after animals, I wish I did! But I love to go for a walk in the country but I’m not a country person…it’s not really my language.