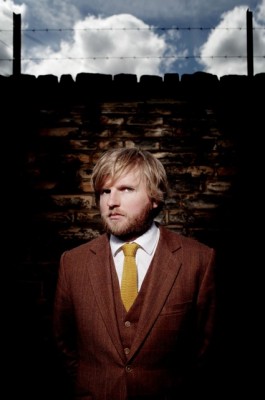 Tom Hickox is not your ordinary singer-songwriter. Whether it comes from being born the son of renowned conductor Richard Hickox CBE and an orchestrial timpanist, or whether it comes from a having a far bolder vision than your average musician, Hickox has recorded a debut album of beautiful songs that resonate with power. Combining the lessons a make-shift musical education that involved playing anything and everything he found about the house with a love of literature and poetry that inspire his lyrics, War, Peace And Diplomacy promises to be an exceptional record. We caught up with Tom before he takes off.

Hello, please introduce yourself and your music to the uninitiated.
I write music that I would want to listen to. I’m told that my music sounds like it sits in a strange hinterland somewhere between Nick Cave and Antony and the Johnsons, but when I write it is with no one else in mind, and I think that over the years I’ve developed a sound that is very much my own.

Tell us a bit about your latest release.
My album War, Peace and Diplomacy is out next year. It’s a record full of stories, mostly written from the first person, but rarely is that person me. They chronicle the extraordinary events experienced by these unusual characters – rogues, antiheroes, victims and chancers – and explore these events, some of which are very major, through the peculiar and self-orientated reasoning of the human mind. This is set over a soundworld that is at times very intimate, but also at times cinematic in its scope. My co-producer Colin Elliot (Richard Hawley, Duane Eddy etc) is a genius for sound and he was instrumental in bringing alive the character of each song. Hawley himself guests on the record.

What was your best ever gig?
Without doubt, Radiohead in South Park, Oxford in the summer of 2001. It’s one of those very rare gigs that’s gone down in folklore, and rightly so. They were at the end of their Kid A tour, and this was their homecoming. Kid A had nonplussed the critics and probably many fans, but that material in particular that night just sounded like nothing I’d ever heard before, tearing through the PA with an astonishing energy and power. It rained all night as well, properly chucked it down with hot summer rain, but this somehow only made the gig even more electric, even more exciting. And they finished their final encore with ‘Creep’, sending 50 odd thousand into complete raptures. Unforgettable.

What’s the worst thing about being a musician?
Nothing at all. Given how much some people hate what they have to do to make ends meet, I would never complain about doing what I love for a living.

What inspires you?
People’s minds and great art.

If you won a billion pounds what would you do with it?
I’d probably give most of it away to charity, but not before building myself a studio (possibly a converted, deconsecrated chapel overlooking the sea) choc-full of rare and beautiful instruments and extremely tasty analog recording equipment.

Which of your songs is your favourite and why?
It’s a bit smug to think of one of your own songs as your favourite isn’t it?! I choose “God Only Knows” by The Beach Boys for achieving pop perfection.

What are you plans for the future?
To compose and develop a body of work that is undeniable. And I’d like to do a gig in every state in America.

Finally, we’re always looking to expand our musical horizons. Do you have any recommendations of bands or artists we should be looking out for?
Marcus Bonfanti – the greatest British guitarist of our generation. He’s huge in the blues scene, but still yet to really make his mark beyond that. It’s got to happen at some point – great bloke too.