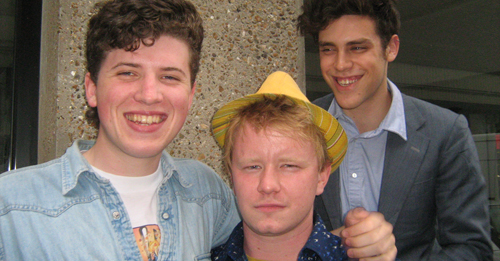 FFS caught up with Charlie Fink and Urby Whale ahead of their instore at Rough Trade East to talk about their exponential rise to fame.

FFS: The album’s out on Monday, are you pleased with it?
Charlie Fink: Yeah we’re delighted
FFS: And your single Five Years Time is doing very well.
CF: Yeah, It was download until Monday and then it was physically released on Monday and it seems completely absurd, we have no idea how this has happened

Have you had a good response from other artists?
CF: All our friends love the album, for me that’s the most exciting part. Obviously Laura [Marling] sang on it but Laura and Johnny [Flynn] nabbed the album pretty much as soon as it was finished, Johnny told me he took it on holiday and said it was the soundtrack to his holiday and I find that really satisfying
Urby Whale: My dad really enjoyed it. He’s the most critical man about anything. What’s nice is a lot of people say it’s really grown on them too.
CF: It’s an instant grower.
UW: It’s got the instantaneous stuff, it’s got the growers…
Both: What more do you want?

So you mentioned Laura and Johnny, you seem to have a folk community around you, how did you meet everyone?
CF: A lot of it’s being a similar age playing similar music in the same city. None of us were friends before. Laura I met because I did some solo support for the first tour she ever did. And then Johnny we met through being part of the same nights and stuff.

How do you go about writing songs, and where do the ideas come from?
UW: Charlie is the songwriter, the sole songwriter and sole lyricist.
Charlie: I’ll write them and bring them in and they’ll evolve once the band has got their filthy mits on them.
UW: They all come in as dance tunes!
CF: If I had my way we’d be on Kiss fm! …not really… I always try and work to a specific project all the songs on this album were written to be on the album so they all have similar themes and vocabulary etc. This album is quite broad strokes. It is personal but at the same time it’s meant to have a broader meaning whereas the next album that we’re writing at the moment is a lot more personal

So the next album will have a different sound?
CF: Yeah, well melodies and stuff will remain, but at the same time it’s a very different thing. I think that’s something we’ve always wanted to strive for as a band. You can get lost in the fact that you’re a band and you have a sound and whatever and I think that’s quite stupid. Although this is the first time I feel like I’ve written songs that have been of any worth I was writing songs three years ago that didn’t sound anything like this and in three years time I’ll probably be writing stuff that doesn’t sound anything like it. I was reading this interesting article about Jonathan Rickman, he says – not detrimentally – but he said ‘if you’ve heard one of my albums you’ve heard them all’. But we want to test ourselves and experiment more. Not that one way is more valid than the other.
UW: What we want to do is be as intimate as we are at the moment but keep evolving. I think we need to keep moving.
CF: A band I really respect is Radiohead, I think they’re a great band, but you probably couldn’t get them in the kitchen and get them to play their songs. At the same time as I love being investigative in the studio, I think you’ve got to have the base template of a good song, that’s what’s important. I think the thing with a lot of these London bands is just people going back to a basic sense of songwriting.

We know you produced LM’s album, was that just Charlie?
UW: that was JUST Charlie
CF: and Tom did the string arrangements.
FFS: Have you produced any other stuff?
CF: Yeah, it’s quite weird, I have done other stuff that’s the only album. Since I was about 16 I’ve been recording stuff in my bedroom doing demos and stuff and playing around with sounds. I didn’t think I was really doing anything particularly inventive but it seems that a sound was formed from just doing that. I didn’t really take it seriously being a producer. We did that tour and [Laura] just really liked our songs and the recordings and stuff and she just asked me to produce some stuff for her. As I said I didn’t really take it very seriously but it worked out pretty well.
UW: You’ve been working with Jay Jay Pistolet recently haven’t you?
CF: Yeah, I’ve just produced an EP he’s putting out after the summer.

What are your influences?
UW: It’s weird cos I got into a lot of stuff through Charlie and Doug
CF: It’s quite cyclical though because Urby has been a family friend – well a friend of Doug’s – since they were about four. Urby introduced me to the Stones ages ago and then we had a 10 year gap from each other then I introduced him to more modern stuff.
UW: A lot of the new york antifolk I got into when I joined the band cos I hadn’t heard a great deal of that, everything from Jeffrey Lewis to Diane Cluck.
CF: I think back as far as Daniel Johnstone.
UW: Yeah Daniel Johnston, Bonnie ‘Prince’ Billy, those guys.
CF: it’s like we were saying, I think that’s what the New York antifolk scene is about: songwriting. The song is what matters.
UW: Looking forward Talk Talk and Smog are two big deals for NATW.
We’ve started travelling together so you end up listening to it together and everyone can get into it.
CF: We’ve basically been going through albums we like and going ‘lets use that… that guitar riff and that vocal’.
UW: I think that’s one thing that will be different, is that we’re now listening to music in this environment. The environment you’re in now in fact. On that CD player and those speakers.
CF: [laughs] So the answer to the question who are your influences… A lot of the American folk really, and English stuff, I like Adem a lot.

You’re doing a lot of festivals this summer, have you got a favourite?
CF: Cambridge Folk Festival feels like a genuine festival not just for people who want to go to a festival and act like a loon, they really consider music, the people who go there, and are quite discriminating. It’s quite intimidating being easily the youngest people at the festival by a number of years and also we’ve had this unexpected chart success so it felt really good to be able to connect with that crowd.
UW: You could almost hear people listening! 2000 people silent in the quiet bit of a song is like, wow!
CF: You’re inclined to play to the energy of the room a bit, it’s nice to be able to be considered.
UW: We could play some stuff that we rarely play.
CF: In an ideal world we’d rather be on that stage than a reading bill or something, we feel we belong better there.

Who are you looking forward to seeing at End of the Road?
CF: The annoying thing is that we’re playing on the Saturday and easily the best day is the Sunday. We’re going out to America on the Sunday which is so annoying
UW: Who’s playing on the Sunday
CF: Well the last two on the 2nd stage are Jeffrey Lewis and then Mountain Goats
UW: Oh God! And we played at the same time as Leonard Cohen at Glastonbury

What are your plans for getting back in the studio, you mentioned an album?
CF: There’s an album in the process at the moment. We’re doing our first week of demoing in a couple of weeks and the aim is to have it done by January. But we just can’t wait to get back in the studio. For me that’s what it’s about: being creative, writing your songs recording your songs playing your songs. For me that’s the most exciting bit. The frustrating thing a little bit is that our album was finished in February but it’s just being released this week, so people are coming to these songs fresh but we’ve been playing them for ages.
UW: We said at the time that people should have talked to us after the record, I had a lot more to say then I can’t even remember the record!
CF: Now all I want to do now is talk about the next record.
UW: (sarcastically) Yeah we’re really excited about it!
CF: No we are!
UW: Yeah we’re ecstatic but it’s weird but you’re talking about what happened 6 months ago.
CF: The band Stars put their album on iTunes the minute it was finished. So people could have it and hear it and talk about it. Otherwise there is that delay. When you’ve finished something you’re desperate to share it and for people to hear it. That’s the point of being in a band, you want to have some immediacy to it. So maybe we’ll do that… shall we do that?
UW: Yeah I think so.
CF: Yeah we’ll do that, that’s an exclusive!

You’re doing a tour later in the year, so what music is that going to be?
CF: I think we’re going to start creeping in some new stuff. But I’ve got this dream. It’s a huge project and it seems like time is against us on all these things, but what I’d really like to do is have a film that runs the length of the album, it won’t be like the R Kelly thing…
UW: …a visual accompaniment to the album.
CF: Yeah.
UW: When bands have done 6 or so albums and release a new album I do think it’s totally valid when they play 60-70% of that record and some of the old hits.
CF: There’s definitely a difference between the first album and all the other albums because the 1st album you’ve been playing the songs coming up to it but with the second you come to it quite fresh in the studio so you’re almost more enthusiastic about it.
UW: I think so.
CF: When we’re talking about it, it almost sounds like we’re not that enthusiastic about the first album.
UW: I’m not prouder of anything else that I’ve ever done.
CF: Well you’ve got quite a lot to be ashamed of!
UW: Ha! But that’s a peak for me in terms of pride.
CF: Yeah and I think we can speak for the others as well when we say that.
FFS: Thanks very much, Noah and the Whale.