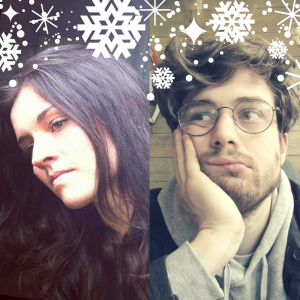 Two of our favourite songwriters Joe Innes and Hattie Whitehead are teaming up for a very special Christmas gig in London next week. Joe and Hattie both love music and Christmas and they want to make sure you make the best of the season too. Now we’re not suggesting you skip the Mariah Carey and Jona Lewie this festive season, Santa forbid, but here’s some slightly more (mainly) leftfield choices with which to pepper your Christmas playlists.

There’s just something very comforting and festive about a good old jazzy Christmas song, especially when it talks about Chestnuts roasting on a fire. And what better voice to sing it than the velvety tones of Nat King Cole! This one has always been a classic in the Whitehead household at Christmas.

Home Alone at Christmas… what more can be said. Especially in the scene with this song, where Kevin shows some mad skills in puppeteering and multi-tasking.

I did a Christmas cover of this song a couple of years ago. Joni Mitchell is a big favourite of mine, and this song is no exception to her beautiful writing. I think she may be one of the only musicians that can make Christmas melancholy successfully!

For an album titled ‘Low Christmas’, this song is pretty uplifting. Probably the most cheery track on the album from Low, those sleigh bells in the background make me want to get myself a nice glass of mulled wine and a mince pie!

I only discovered recently that the Beach Boys did a WHOLE Christmas album! What have I been missing for the last 26 years?! Christmas day from now on will definitely be surf-themed. Sorry family.

I remember seeing Mumford and sons before they were famous in a Christmas show at Notting hill arts club, Laura marling played too, and she played this song… It made me feel super Christmasy, and I wrote it into a song. Scroll down to ‘santa says relax’.

8. Christmas Is Going To The Dogs – Eels

The perfect alt Christmas song, whether it’s about a Christmas gone awry or literally about dogs… Who knows?

So I’m just going to plug our new Christmas single. It’s about the horrors of shopping at westfield at Christmas… Enjoy.

Dylan does his best impression of a muppet in the fantastically surreal video for this tune. It’s based on a German drinking song, and you can really tell.

Hattie Whitehead and Joe Innes & the Cavalcade are hosting a festive special double headliner. Hattie will be playing with a ten piece band and Joe’s got Patch & the Giant’s Angie Rance joining him on trumpets to celebrate the release of his Christmas single. The gig is on 8th December at St Luke’s Church in Holloway, and of course there’ll be mulled wine and mince pies, because Christmas. Tickets are available from We Got Tickets.